What if you viewed Christian classical education through the lens of repentance and discipleship? What if you sought to infuse all of life and, indeed, all of education with a Biblical perspective? Those were just a few of the topics at the heart of my recent conversation with Dr. George Grant.

Watch the video, read the show notes, and share with your friends!

Prefer to listen to your content? Subscribe to Homeschool Conversations on Apple podcasts or wherever you get your podcasts so you don’t miss a single episode!

Who is Dr. George Grant?

Dr. George Grant is the pastor of Parish Presbyterian Church in Franklin, TN. He is the author of more than 60 books on topics ranging from theology to history and economics, plus innumerable other articles. He is an educator, school-planter, and speaker. Recently, he’s added “podcaster” to his resumé with The StandFast Cast. You can find him online at GeorgeGrant.net.

True Education is a Form of Repentance {1:40}

An old blog post of Dr. Grant’s has had a profound impact on the way I view education. (I referenced his post in the article I wrote about teaching as a form of repentance.) I asked Dr. Grant to explain what he meant by his statement that “true education is a form of repentance” and how it impacts how we educate our children.

Dr. Grant was quick to say that this is not an original idea: “This is at the heart of the Bible’s conception of how we grow.” We recognize that none of us have yet arrived at the place where we know, understand, and have done all that we need to do.

“We need to press in to a life of humility and doxology,” Dr. Grant smiled. This will be an “ongoing process of conforming ourselves to the image of Christ, growing in wonder and delight at the world He has placed around us and the calling He has given to us,” he continued. “Education is not to stop at knowledge. It’s to press on to understanding and then from understanding to wisdom.”

Because we are each dead in our trespasses and sins, he reminded, “we don’t want education to make us a better version of ourselves. We want to live in Christ, meaning that we progressively find our identity in Him rather than in any other thing. So education is really an impetus toward that kind of growth and maturity.”

We also discussed how impossible it is for us to pursue virtue through any kind of self-improvement mechanism. Apart from God’s mercy, we are incapable of loving God or our neighbor.

“Humility and hunger are at the heart” of what Dr. Grant seeks to stir up in education and discipleship.

This also relates to what we’ve discussed elsewhere here at Humility and Doxology: homeschool is not a vending machine. Resting in the Holy Spirit’s work frees us from fear and anxiety, frees us from the worry that we have to do all the right things to produce the right product.

Dr. Grant said, “It’s so easy to fall into a kind of practical works righteousness. We reject the idea theologically, but then practically we sort of live it out by our pursuit of achievement and perfection…Our children need to see us walk gracefully far more than they need to see us walk perfectly.”

Christian Classical Education: When, Why, and How? {7:00}

Dr. Grant shared a bit of the story of how he first became interested in Christian classical education. He was always a good student. He loved to read. He seemed to achieve all these great things academically and thought he was doing just fine.

As a young dad, he decided he needed to really figure out what education he wanted for his children. Simultaneously, he was working as a political speech writer. As part of that work, he began studying the founding fathers. Dr. Grant found himself fascinated not so much by what the founding fathers had said and written, but what they had read and thought.

He had a startling realization: “Suddenly, I realized I didn’t know anything! I realized that I had been robbed all through my education. I had gotten great grades. I had achieved things educationally. But I knew nothing!”

This led Dr. Grant to explore just what type of education had been a part of the lives of such incredible individuals. He discovered Charlotte Mason, Dorothy Sayers, John Amos Comenius, and Gerard Groote (Groote established schools that would eventually educate people like Erasmus, Beza, Luther, and Calvin).

Dr. Grant realized that “we needed an entirely new model that was an entirely old model, based on the Biblical idea of discipleship, based on Deuteronomy chapter six’s pattern of shaping the mind after the heart of God.” He actually began to talk about these ideas of classical Christian education before he even knew there were others exploring the same thing!

The Grants and others started a homeschool co-op called Franklin Classical School using a bit of the ideas of Charlotte Mason, Francis Schaeffer, and Rand and Susan Schaeffer Macaulay. Through trial and error, they began exploring what this type of education was going to look like for their children. Dr. Grant knew he didn’t want his children robbed in the same way he had been.

“What we want to do is teach our students how to think. And we want to teach them how to think by guiding their thinking through a substantive and delightful engagement with the best books that have ever been written, the most beautiful art that has ever been executed, the most magnificent buildings that have ever been built, the most glorious music that has ever been played…then, from a Biblical perspective, to help shape their thinking along those lines,” Dr. Grant explained.

At its core, Dr. Grant sees that what we’re attempting to do is simply what is described in Deuteronomy 6: “to take our children and talk about the things of the Lord through every dimension and by every means at our disposal…infusing all of life with Biblical meaning.”

The approach they take at Franklin Classical School is very rooted in covenant community. Something that makes them distinctive is that they are heavily influenced by the responsibility of parents to educate their children. They’re perhaps more homeschool and Charlotte Mason influenced than some other classical schools.

My brother and I loved Dr. Grant’s humanities lectures in our own high school years, and now my own high school students are getting to enjoy them. Dr. Grant’s teaching was foundational in forming the way I view the world. I asked him to explain how this approach to the study of history differs from a modern isolated-subject approach to learning.

Dr. Grant explained, “In the 19th century, it was called Moral Philosophy…The purpose of Moral Philosophy was to study culture, which has a spine of the timeline of history, but along that spine you have to consider art and music and literature, the various ideas, technologies.”

If we only focus on the “big” moments and individuals of history, he noted, we miss the integration that happens when you talk about cultural movements.

Dr. Grant expanded on this by demonstrating two different ways of approaching the study of the 14th century. Watch the video to get the full story!

With this rich understanding of the history of culture, we’re able to have a well-ordered perspective about our place in the world now.

“If history is dates and dead people and we miss all of the stories…then we’ve really made a mess of things. History really is just remembering the great stories of the past and then integrating that with the whole movement of God’s providence in cultures. That then becomes Moral Philosophy, and it shapes our way of seeing the world today.

If we don’t know where we’ve been, and how we’ve gotten to where we are, there’s no possible way that we can see forward to where we need to go from here or what trajectory we should take,” Dr. Grant asserted.


What about the modern objection that a Christian classical education doesn’t seem very practical? {21:40}

Dr. Grant somewhat humorously asked us to consider the object lesson of the man in the street interview such as has been popularized on late night tv. When you ask the person on the street questions about any topic, really, you’ll quickly see that the “practical” education we’ve been providing as a culture is incredibly impractical.

The problem? We haven’t taught students how to think either concretely or abstractly.

Teaching in a substantive way enables students to discern what is right and wrong, Dr. Grant encouraged. “Discernment is an incredibly rare, but an incredibly precious, treasure. That’s what we’re after. We’re not after marks on a transcript. We’re after thinking students.”

I recently listened to a podcast episode Dr. Grant and his wife recorded about their reading, so I was curious to ask him what he’s currently reading this week!

Listen to him excitedly discuss these titles and you’ll be adding them to your wish list like I did!

The Keystones Project and Christian Discipleship {30:00}

You won’t want to miss Dr. Grant telling the story of the 19th century Scottish pastor, Thomas Chalmers. It is the study of Chalmers’s life and work that has influenced and inspired Dr. Grant to pursue the recent Keystones project.

{I, in fact, just read Chalmers’s famous sermon The Expulsive Power of a New Affection last Sunday! It’s one of the many books that Standfast Books has published over this past year.}

At a certain point after his conversion, Chalmers realized he had used the Bible, but he didn’t know the Bible. He began looking for what he called the keystone verse for every chapter of the New Testament. It was to be the verse that best summarized the argument of the chapter. In turn, he used this personal devotion study as a pattern for discipleship.

It builds off the Lectio Divina Christian tradition, looking for what you see in a verse, how you understand what that verse means, and then praying thru the verse. Chalmers added memorization and a step he called the “evangelii” which asked, “Where is the Gospel in this chapter?”

The newly published Keystone notebooks walk us through our own study of the Bible in this kind of systematic fashion.

Be sure to check out all the other chats in the Homeschool Conversations series! 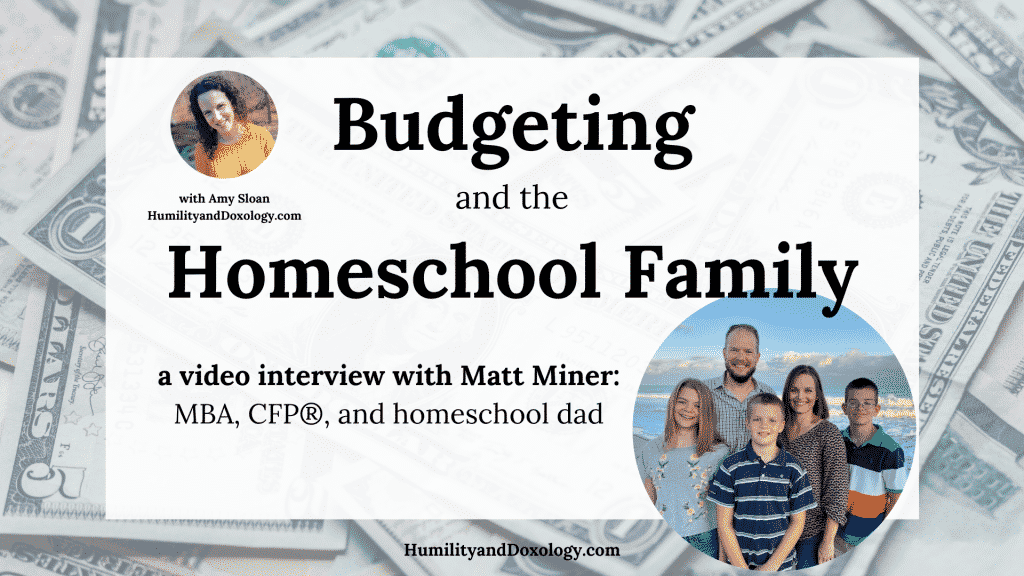 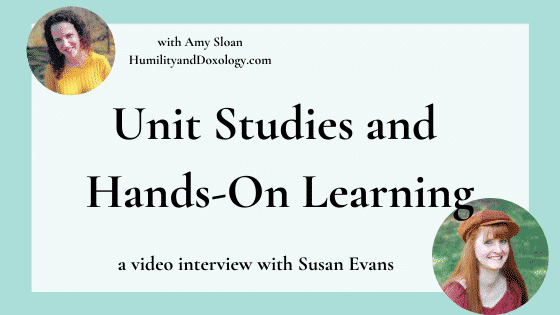 2 thoughts on “Repentance and Discipleship in Christian Classical Education (a video interview with Dr. George Grant)”